Your Perfect Weight Forever Training Is In Progress. Do NOT Close This Window Or Presentation Will End!

“How to Get Long Lasting Weight Loss & Be Your Perfect Weight Forever WITHOUT Expensive Treatments, Pills, Restrictive Dieting, Surgery or Boring Workouts!” Get Instant Access to Perfect Weight Forever For Just $99TODAY!

Here's What You'll Learn On Today's FREE Master-Class with Marisa:

“The EXACT Reason Why You Are Still Failing to Reach Your Perfect Weight - Even If You Have Tried Diets, Pills, Tough Workouts and Perhaps Even Surgery!”

“How a 26:44 Minute Audio Can Mentally Shrink Your Stomach And Be More Effective Than Expensive Gastric Banding Surgery!”

“How to FINALLY Get Rid of Your Destructive Eating Habits, and Condition Your Mind to Become Motivated to Only Want to Eat The Right Amount of Healthy Food!” ARTICLE FROM THE MIRROR.CO.UK

“I’ve loved chocolate for as long as I can remember and could never have imagined that my relationship with it was at all problematic. Maltesers were my favourite kind but I also loved Galaxy. Sometimes, I would eat a few squares of chocolate first thing in the morning – before I did anything else. And I never went anywhere without popping a packet of Maltesers into my handbag. My addiction was at its worst last summer I’d put on three stone and weighed 163 lb.

I was eating 6 or 7 bars on a bad day and I found that I got really moody if I hadn’t had my fix. I finally realized that my problem was serious. A friend suggested I try hypnosis so I went to see hypnotist Marisa Peer and in just an hour and a half, she changed my life. Marisa helped reprogram my brain so that I no longer associate chocolate with happiness. It was amazing. For the first time in my adult life, I didn’t feel like chocolate.

My friends even joked that because I was no longer eating chocolate, I was the reason Woolworths had gone bust. Now I feel indifferent to chocolate. It doesn’t disgust me but I just don’t want it. I’ve tested myself a few times, putting a few squares in my mouth, but I just spit it out. As a result, the weight has dropped off me and I’m now 130 lb and wear a size 6 (US).” She was too embarrassed to even show her face

Jacqueline has been one of Marisa’s proudest success stories. After curing her cravings with the techniques in my books, she has continues to succeed shedding more and more weight. She’s lost seven and a half stone and kept it off for almost ten years. I’m incredibly proud of Jackie, she looks healthier and at least ten years younger than when I first met her.

From Facebook: “This is me after losing 3 stone. Oh my God I cannot believe this is me then went on to losing another 4.5. Found this today OMG!” Incredible Self Esteem That is Here to Stay

“After nearly 2 decades of struggling with weight, Hannah finally found the answer with Marisa’s method.

“I can’t tell you how my self-esteem has changed and the best thing of all is, I know for a fact that the changes I have made to my diet and lifestyle are permanent, this is no fad, no diet, but a lifestyle change and the new me is here to stay!” More Energetic Than Ever!

“Two years ago I started overeating because I was unhappy at work. My only exercise was walking to the shops to buy junk food. I didn’t even try to diet as I knew I wouldn’t stick to it.

During my session with Marisa Peer, I felt so relaxed. I discovered how I comfort ate from an early age, which foods would benefit me and how to visualize my ideal size. I’ll never go back to my unhealthy ways, I’m more energetic and so happy with my body now.” “Once discovering why I had issues with food it was just a simple case of following the methods and they revealed such amazing results!

Six months ago I was size 14 top and 26 bottom. I was ready to shed that weight and change my life. I’ve never been happier – 49 lbs lighter, a size 6 top and 8 bottoms, a whole new wardrobe and still toning!”

Is PROVEN by "Supersize Superskinny" “I didn’t know what to think afterwards as it was so bizarre, but the amazing thing was that within three to four months I lost 28 lbs. I suddenly found that I was driven to make the correct food choices. I didn’t want to eat rubbish any more. I wanted to treat myself with respect.”

Perfect Weight Forever is proven by the famous TV Series "Supersize Superskinny" that tested popular diets, pills, surgery & treatments & found this method was the only one to really work. In 2008 a sensational TV documentary series called Supersize Superskinny set out to test the effectiveness of diet plans, pills and even surgeries used in clinics around the world and sold over the internet.

The series lasted for over 6 years and out of all the methods tested most failed to work long term and some even had disastrous side effects.

The presenter of the series, Anna Richardson, who had struggled with her weight for most of her life and had tried almost every method available to get to her perfect weight, found that only one method actually worked.

Anna has now become a household name in the UK and a role model to millions for her personal transformation. Using this simple technique you are about to discover:

How Anna Got Her Perfect Weight...

In a recent blog post for the major newspaper, The Independent, Anna gave a deeply personal admission about her weight problem and how she finally overcame it. Anna said:

“For years I’ve struggled with my weight, and I’ve literally tried every diet. I was the reporter for Channel 4’s diet series Supersize v Superskinny and my challenge was to immerse myself in the world of extreme diets and to communicate back the truth.” 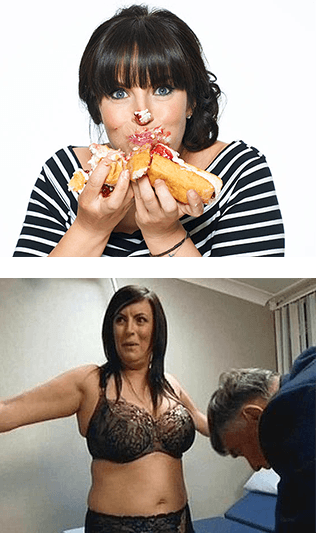 “At the time of being asked, I was a little insulted. In my head I was a svelte 126 lb, size 8 stunner – whereas in reality I was a hefty 161 lb size 14 porker. Overweight and in complete denial. A fact that only became apparent to me when I agreed to weigh myself on camera, for the first time in seven years. I was devastated.

So I threw myself with gusto into the diets I was trialling, which included: The Apple Diet (apples…that’s it. Favoured by supermodels), Diet pills (ditto), the Baby Food Diet (beloved by Hollywood A listers), the Maple Syrup Diet (beloved by Beyonce), the Baked Bean Diet (beloved by no-one), and as a last resort, Liposuction (which went wrong).

I was by turns constipated, flatulent, hungry and in pain. And after all this, did I lose any weight? Just a few pounds.”

But Then It All Changed... 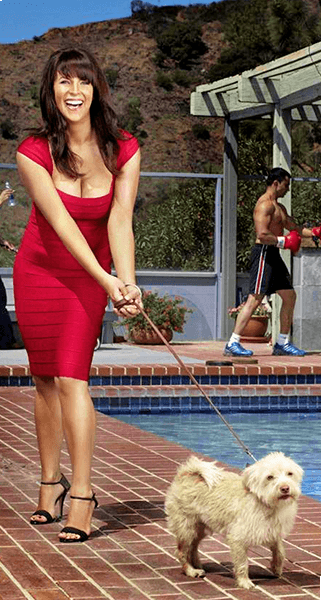 “The change came when I went to see Marisa Peer for a session. It was while I was under hypnosis that I quite had a ‘lightbulb moment’ – an acknowledgment of where my issues with food began, and the realisation that I didn’t want to be a prisoner to food any longer. Put simply, I made a decision to change.”

In an interview with The Telegraph (a major UK newspaper), the lovely Anna Richardson talks about how she lost over 35 lbs and kept it off for over four years after just one session with Marisa Peer.

Her interest was sparked during the filming of Supersize vs Superskinny in 2008. Anna had undergone a Regression Session (part of Marisa’s unique method) with well-known celebrity therapist Marisa Peer, and discovered that her own eating habits were formed during early childhood. Her mother was taken into hospital. Her father had tried to comfort Anna – in her mother’s absence – by feeding her treats, fast food and fizzy drinks. And so a relationship between food and comfort was firmly established.

Yet, after one session where Marisa cured the problem rooted from her past, Anna lost over 35 lbs, to settle at under 132 lbs – the exact weight she had told Marisa, she considered her perfect weight. “I found myself making better food choices, without realising it – it was weird,’’ she admits.